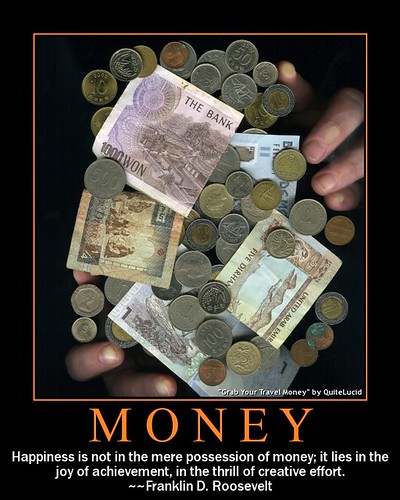 Do you believe “money cannot buy happiness“? Or, do you believe it starts somewhere else? If you love somebody – is that enough? Can you live on love alone?

Let’s ask it this way: What makes you the most happy? On a daily, weekly, yearly basis? From a 1 – 10 on the happiness scale, where are you most of the time? What drives that?

If I gave you $10,000 dollars cash right now – how long would it last before you drop on that scale? Or, if I could show you how to make another $500.00 dollars consistently every month, with little work, would that be better for you?

Turns out a lot of our dealing with money (and bigger levels of happiness, I believe) deals with your relationship with money over time.

Think about it – what does it feel like when you think back to when you were growing up? What is your money blueprint?

Some researchers believe money can actually make you happier, overall.

More money inspires more happiness at least up to $75,000 a year, the point at which the effects wear off, say Princeton researchers

CNN offers a few tips. For instance:
Go for quantity, not quality.Instead of saving up to splurge on the nicest restaurant in town once every six months, eat out regularly at your favorite neighborhood joint.

According to a recent paper by the University of British Columbia’s Elizabeth Dunn, Harvard University’s Daniel Gilbert, and the University of Virginia’s Timothy Wilson, the happiness you get from small and large purchases alike eventually fades.

So go for frequent cheap thrills, not the rare budget breaker.

What do you think?

Related articles on Being Happy Without Money