Security is a big deal online – actually anywhere, anytime. And, when announcements of exploits and security holes get public, it’s both embarrassing for the the company in question, and the users of those devices. Perhaps more on the annoying and scary side for the users – depending on how high or low your “dooms-day” barometer is set.  If your personal data is exposed, the first question will be: what information was compromised? For example, somebody’s email may/will not be as bad a personal phone number or address. But, exposing a credit card or social security number would be *really* bad. (Tip: Have you tried lifelock?)

What vulnerabilities exist in the Android or Apple devices? Here’s what happened to the Android and Skype this week.

The chat logs, phone numbers, profile and other personal information was exposed in the Skype app for the Android. 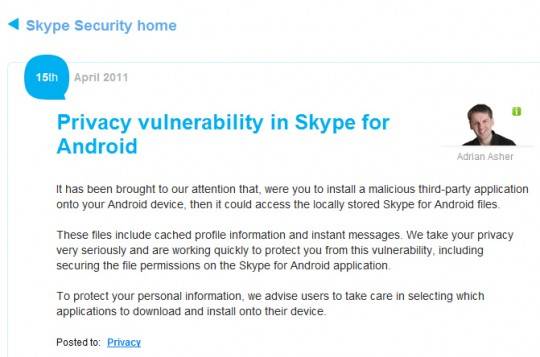 Skype has been downloaded by over 10 million Android users, so the impact of this news was pretty severe.
How can you tell what apps are vulnerable what apps aren’t? One thing that users can do to protect themselves is to look at what permissions an app requires. That information will just before you hit “install.” If you don’t think the app needs all that data, then you should not install it.
Here’s the YouTube video that shows how to expose the exploit in Android/Skype:

Folks would likely feel more secure with Apple devices and apps after a leak like this one!