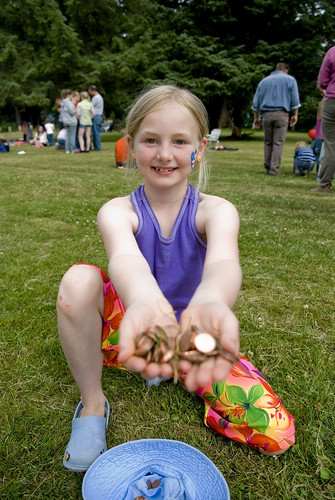 Love it or hate it, it’s a cultural-socio factor in all modern economies.

But where did money come from, when was money invented – and how has it become such a force in society?

The history of money is long and complicated – and incredibly interesting – but here are the basics.

I believe the earliest known (not necessarily oldest really) forms of money are from Ancient Egypt. No paper money, just coins created from metals such as silver and gold, used as an alternative to barter – also probably used as symbols of high status. – Answerbag.com

The world used to operate on a barter system. People would exchange goods for services, goods for goods, and services for services. Societies who operated under this kind of economy are now called “gift economies.”

However, as society started to develop beyond hunting and gathering, the gift economy became too cumbersome for general use.

The original idea of money is generally credited to the Babylonians and their neighboring states, who developed the modern economic system as we know it today, with rules of law designating the use and abuse of a monetary system, as well as the idea of “debt” and what it meant.

NOTE: Debt has been around for thousands and thousands of years! No wonder it’s so good at being a problem today.

However, there is also evidence that money stretches back even further than the Babylonians – what’s known as the codex of Ur-Nammu, way back 2050 BC by the Sumerians, speaks about a monetary unit involving shekels as a component of mina, the largest form of currency that the Sumerians had.

While the codex of Ur-Nammu is the earliest extant law code known, there is evidence that societies before it had the concept of money.

So, essentially, the straight answer to the question of, “who invented money?” is that nobody knows for sure.

We don’t know because the concept has been around so long that it predated current known documentation. The true answer is that humans invented money – money is one of the first concepts that we as a species collectively invented and set to use.

Money problems are old hat for humans – probably older than hats themselves!

Related articles to who invented money